You are here: Up-daily » Social Media » Guy Left by GF for Being “Just a Cleaner,” Now CEO of a Successful Business

Guy Left by GF for Being “Just a Cleaner,” Now CEO of a Successful Business 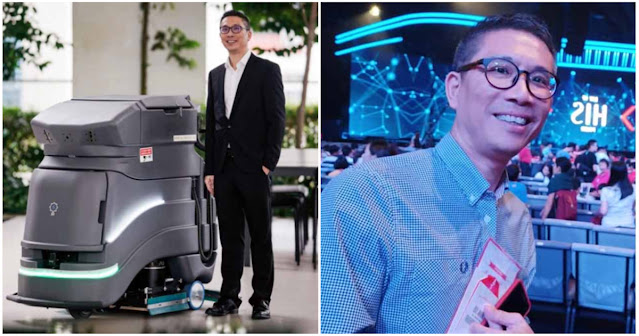 A guy who was left by his girlfriend for being “just a cleaner” has proved himself (and is probably making her regret her decision) when he became the CEO of a successful business many years later.

It’s a classic situation that some people have experienced when they were down on their luck – but it’s amazing how things have turned out for this young man.

From “Just a Cleaner” to CEO of a Successful Business

Life can be difficult when you’re poor. That’s a reality, of course. So, no one can really blame the young ex-girlfriend of Singaporean Vernon Kwek when she left him for a university student because he was “just a cleaner.”

For this girl, she saw no future in Vernon and was worried about what can happen to them and their future kids.

Vernon, truly poor at the time, couldn’t do anything about it. He loved the girl but can’t also make her stay if she wanted to find a better life.

Indeed, life was difficult for the young man who, at 13, began to help his father find a job. After checking newspaper ads, Vernon found as a vacancy for cleaning supervisor. His dad applied and was accepted.

During weekends, the 13-year-old Vernon would help out in cleaning the toilets of the offices where his dad worked.

By the time he turned 14, he quit school to focus on earning money as a full-time cleaner.

While his dad didn’t want him to quit school, the young Vernon was excited at the thought of earning money for the family.

“It was good money to me and I enjoyed the job. I was even more interested in it when I found out that managers of cleaning companies could earn about SGD$1,700 (PHP69,400) a month,” he explained.

Quite amazingly, he was promoted as cleaning supervisor at the same year despite being just 14 years old – that’s how good he was at the job.

“I asked the manager if he was sure. “My dad became a supervisor only when he was 40. I was only 14,” he recalled.

“But he said, ‘Don’t worry. You have your dad’s genes. He has leadership qualities, you should have the same too.”

But it came at a cost for the young man whose girlfriend later rejected him because of his “lowly” job.

Her words made his strive harder. He didn’t want to be “just a cleaner.”

Soon, the company allowed him to open his own subsidiary cleaning company. He had so many clients that he earned SGD25,000 (PHP1,020,000) a month.

But he was so excited with his newfound wealth that he used the money to travel to many places, and was unable to take care of his business and clients.

He filed for bankruptcy. His bad luck lasted for over 4 years.

But he finally found a silver lining when was accepted as operations manager at WIS Holdings. Their clients include luxury hotels, Changi Airport Group, and United Overseas Bank.

By 2017, though, the company asked Vernon for help in finding someone who will buy the company.

Amazingly, this included the first cleaning company that he and his dad used to work in!

Today, Vernon is the CEO of the successful business and now has a wife and four kids. He has no contact with the ex-GF who left him when he was “just a cleaner” but we’re quite she’s already heard about his success…