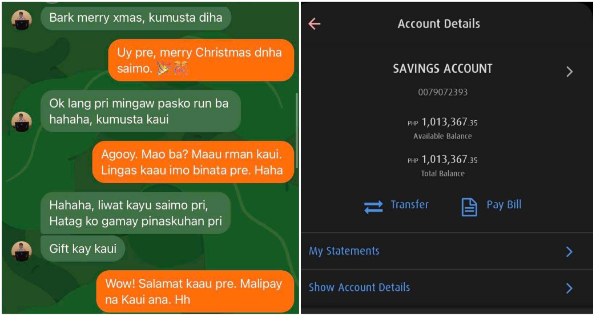 A godfather goes viral for sending Php1 million to godchild for Christmas – and everyone is wishing their godparents were as rich and generous!

But some people think it’s just scripted or something… What you do think?

In the Philippines, many parents really expect their children’s godparents to send something for the kids during their birthdays or at Christmas.

Still, many godparents do take time to prepare some gifts for their godchildren. The amount can vary, but is usually within a few hundred or thousand.

So, imagine one parent’s surprise when a friend sent Php1 million to his godchild.

Francis Barkley Bautista shared how his friend, comedian Wawe Agravante, messaged him to ask about his godchild, Kaui.

While they were exchanging greetings, Wawe asked for Francis’ bank account details because he wants to send a “little gift” for his godchild.

Francis obliged, sending his BPI account details, but was soon surprised to learn that Wawe’s “little gift” was actually Php1 million in cash – sent directly to the bank account he provided!

Shocked, he asked whether his friend was serious in sending him such a huge amount of money.

Anyone in his shoes would probably have the same reaction.

After confirming with his friend that it was for real, Francis posted about the incredible Christmas gift from this generous ninong before jokingly wondering whether he should buy a house or a pickup truck with the money.

In a separate post, Wawe joked that he made a mistake in sending the money and asked Francis to send it back. LOL.