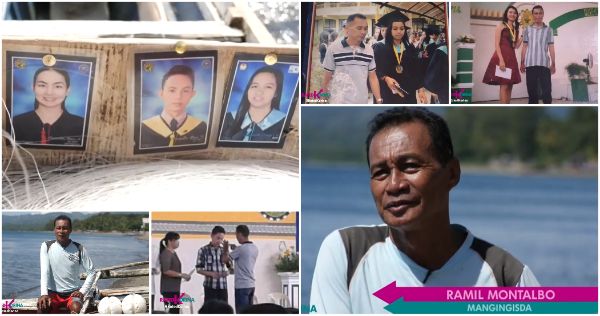 For many poor parents, education is they only thing that they can provide for their children because they don’t have any riches to give them as inheritance.

Yet that’s amazing! Some children even pay back their parents’ sacrifices by exceling in the college degrees or professions they’ve chosen.

Tatay Ramil Montalba is a poor fisherman who goes out to sea to catch some fish using a simple hook and line or a small net.

Like other poor fisherfolks, his simple income is from the sea but it wasn’t enough for them to become rich (as opposed to owners of big fishing vessels).

Still, Tatay Ramil knew that he has to find a way to ensure that his kids won’t live a similar life as adults. So, he sent them to school.

The three children understood the assignment and made sure to excel in it, not just so they can have a better life but to also make their father proud. They want to make sure that their father’s hard work and sacrifices won’t be in vain.

What a great way to thank Tatay Ramil! The proud fisherman dad still goes out to sea to fish, but now with his three children’s graduation photos pinned on his boat.

Elena works at a famous hotel in Dubai while Emily and Elmo work as teachers in the Philippines.

All their dreams have been fulfilled.