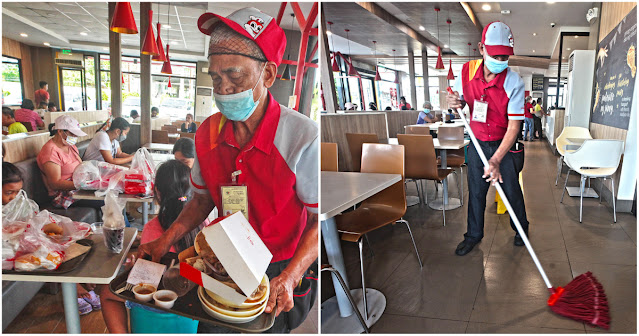 A 71-year-old grandpa goes viral for working as a Jollibee service crew – and what’s really surprising is that this is in the Philippines, not in some other country where this is fairly common.

Wouldn’t it be nice if there are no more age restrictions in the Philippines so that anyone can get a job, no matter their age?

That’s a subject of some debate, though, because some people also feel that the senior citizens deserve to stay at home or just relax and enjoy their retirement. What do you think?

In the Philippines, it’s fairly common to find job postings or ads that show age limits as low as 30 years old – some even go as low as 25 years old! That’s for the maximum age limit, not the minimum.

So, many Filipinos are amazed to meet older folks working in business establishments when they’re traveling abroad.

That’s why we’re all impressed to learn that there’s a 71-year-old grandpa who is currently working as part of the service crew at a Jollibee outlet in Candon, Ilocos Sur.

He’s identified as Willie Baricawa who used to work at the Candon City Hall.

This grandpa got accepted as service crew in August 2022 but only went viral this December.

We’re amazed to learn that he already has 13 grandkids and he could easily just stay at home to relax. But he chose to go out and work a service crew at this Jollibee outlet.

While some people think that it isn’t ideal for senior citizens like Tatay Willie to work, especially in busy environments like a fast food chain, it makes him feel happy to be around so many people.

Although he looks so serious in the photos, Tatay Willie told the Philippine STAR that he’s happy to meet these people on a daily basis.

Other senior citizens agree with Tatay Willie because they also want to interact with other people, while others also want to feel that they’re still earning a living for their families.