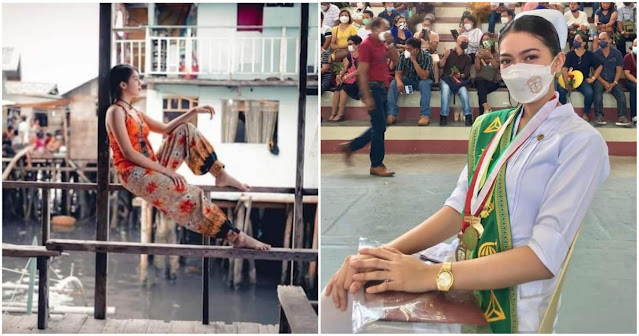 Considering that the tribe is known for asking alms and living in the streets, her story is truly an uplifting one that inspires even the non-Badjao community.

When you think of the word “Badjao,” the first thing that comes to mind is an unkempt person asking for money in the streets.

That’s a sad thing that has become of the community of sea gypsies lost in the big city.

Yet several Badjaos have already made their mark in the community in other ways. One of the firsts was Rita Gaviola, dubbed as the “Badjao Girl” who came to the limelight for her beauty and became an actress.

Another is Carla Mae Telmo, a young Badjao lady from Barangay Totolan in Dauis town, Bohol.

She passed the NLE (nurse licensure examination) last November 2022, fully becoming a registered nurse – the first nurse of the Badjao community in Bohol.

This was partly made possible by the Badjao Bridge Philippines, a non-profit organization helping Badjao people, who helped send the young lady to school.

Telmo attributes her success to being Badjao, and feels proud that she belongs to this community.

I am very thankful to God who heard my prayers. This success is not only for me but also for my family and my Badjao tribe. I am very proud to be a Badjao,” she declared.

When she was younger, Telmo wanted to work in an office. But when at least 21 Badjao children were rushed to the hospital over gastroenteritis in February 2017, she decided to become a nurse.

That incident opened my eyes. I told myself I hope I can do something if it happens again. Right there and then, I decided to become a nurse. I want to help them in the future,” she explained.

She plans to fulfill that goal by working at a public hospital.

“I would like to apply in a public hospital because Badjao people often go there to seek health care. I want to be able to serve them in any way. I can accommodate the Badjao people,” she said.

“Of course they will also see that I did not leave them even after I finished my education.”

She also hopes that other Badjao children will follow her footsteps and go to school, saying that it’s really the key to success, especially in her community.