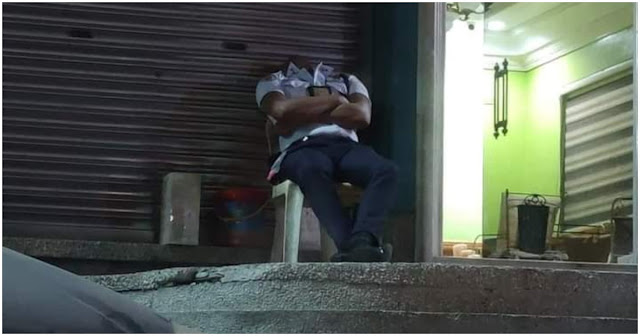 The photo of a seemingly ‘headless’ security guard has gone viral, with netizens saying that they were a bit scared after seeing the photo. It was a good thing that it was just an optical illusion, but did you get scared, too? LOL

Do you believe that ghosts and supernatural beings exist? Well, that’s a subject that has long been the subject of a lengthy debate.

There are people who strongly believe that ghosts and these other scary beings exist, while there are those who think that things like these are products of people’s wild imaginations.

While it’s still common in the provinces, people in big cities are less likely to believe in supernatural beings.

That’s why people found it hilarious when the photo of a seemingly headless security guard went viral.

Posted by Cross Court Manila on its Facebook page, the photo was captioned:

At first glance, you would surely think that this guard didn’t have a head, right?

There isn’t any crime scene here or a case that needs the Ghostbusters. The reality is really so simple: the security guard appears to have lost his head through an optical illusion.

If you’re brave enough to look closely at the photo and examine the scene, you’ll realize that his head wasn’t cut off. Instead, he appears to be sleeping with his head thrown backward, blending with the dark shadows and the dark roll-up door behind his back.

We’re actually glad that the mystery is solved. That scared us a bit there. Did this photo scare you as well? Share with your friends so they’ll get scared, too! LOL