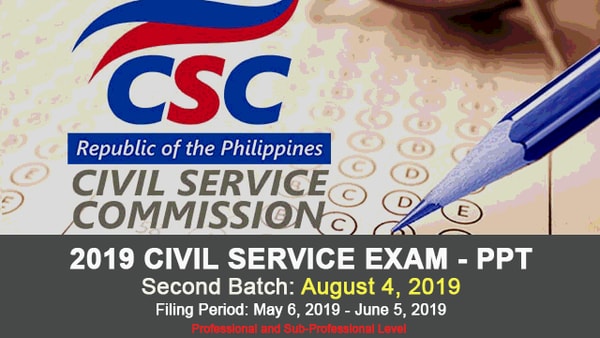 Do you want to become a public servant?

Do you want to apply for government work and help the country in a much more proactive way?

Well, there is one thing you need to do and once you pass on it and its requirements, you can be allowed to work in a government office to serve the country well?

Are you up to the task, then let’s go over the Civil Service Examination!


What is the Civil Service Exam

Well, like the header said you will need this if you want to work for the government. It has two divisions, professional and sub-professional levels. Once you pass this test, then you’re good to go to apply in government agencies and the like.


Requirements to take the exam?

1. Simple, first you got to be a Filipino citizen, that should be an obvious requirement.

2. Second, in the application of the exam, you should be 18 years old and above. This is to confirm that you are in legal age to work in the government.

3. You should have good moral character since we don’t want crooks running our country.

4. You should not be convicted in any offense or crime, while also not dishonorably discharged from the military or a civilian post.

5. Finally, you should not have taken the same level of the CSE in the past 3 months.
Are you clear on that?

Then let’s check the necessary documents, paperwork, and fees to pay to take the CSE.

1. The first document you need is an application form, you must acquire on the Civil Service Commission or the CSC (not online, you need to find the nearest CSE Regional or Field Office near you), alongside with that,

2. Prepare an application fee of P500 for the examination.

3. Take 4 identical ID pictures with a name tag with a first name, middle initial, last name then put a signature above it. If you are going to a photographer, tell him that it will be for the CSE so that he knows what should be done in order to get that photo done.

4. Finally, you must have a valid ID. Get a photocopy and also take the original with you so that they can verify your identity.


When will be the second batch?

(Since the first batch is almost underway and has already received its quota) of exams commence?

The second batch for the CSE is slated on August 4, 2019, the Application period on May 6, 2019 - June 5, 2019, we suggest you as early as possible for there is a quota that once it reaches its mark, the application will be closed.

Now, you got your documents ready, requirements have been fulfilled and you have studied hard for the exam.


Where do you go next?

Well, wait for the day of the exam, August 4, 2019. Find the nearest testing center and take the exam there. Here is a list of cities with testing centers:

That’s a long list, alright so make sure that you find the nearest available testing area for your exam.
Are you ready to help the government become great once more? Take the exam today and make a change!