You are here: Up-daily » Informative » 12 Enormous Difference Between North and South Korea 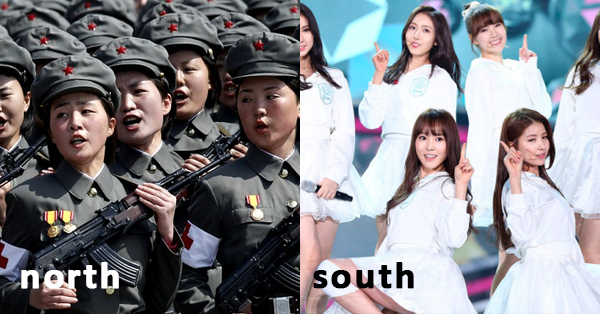 We all know that there are 2 Koreas, the North, and the South and today we will discuss how they are different.

Fun fact first! After World War 2 ended, Korea has been split into two by the 38th parallel and is divided by differing ideologies.
Communism of Russia and China reigns supreme at the North while Capitalism of America has been implemented in the South. From there, the schism begins within these two partitions.


Fun fact ends there so let’s begin the comparison!

North Korea has been known for a strict rule of a dictator with harsh punishments and harsher prison life according to the escapees and defectors of the country.

What makes it worse and weird is that the country has an absurd rule of following a strict haircut which, get it wrong and you’ll get punished.

But come to South Korea, the country functions the same way as the modern countries of today.

They follow the normal laws and they don’t have a dictator controlling the land but they have a President, Prime Minister and some other political figureheads to make sure that power is always in check and not abused.

Want to check your Facebook account while you’re in the North? Sorry, it is not allowed. They have blocked it together with other popular websites. That’s their rule and their internet is more of an intranet system but on a national scale.

The websites you can see in the North though are mostly propaganda media that celebrates their ever-glorious Supreme One. You also need a special permission in order to access this service though, which sucks!

Meanwhile, at the South, it has fewer restrictions and all services enjoyed at the World Wide Web can be acquired by those who live in South Korea.

Even as trivial as this matter. Lifespan in the South is 84 years old in average. Meanwhile in the North, minus the SoKor average by 12 and you got your answer. Although, if you work without toil and no breaks, it’s no wonder their bodies give up early.

South Korea boasts a 50.25 million, twice as large as their Northern counterpart.

The North spends 22% of their GDP for militaries such as acquiring new weapons, training their soldiers and the like. It does bring you worry when you realize that most of their people are starving but they still put the focus on the military.

The South, however, uses only 4-5% of its GDP for that use. The fun thing is, the Gross Domestic Product (GDP) of South Korea is much bigger than the North, which means even if a small percentage is only used for the military, it may still amount to a humungous amount.

Another non-important one but North Koreans are 3 inches shorter than the South Koreans. Talk about bad luck (or genes).

Due to misuse of money and power, poverty thrives at the North. Having 40% of its population are living poor and starving. On the other hand, South Korea has bounced back from the war and had overcome poverty and it now has continuous economic growth.

South Korea has made a lot of influential corporations bringing them money and growth. Companies like LG, Samsung, Kia, SK, Hanjin, and others. Meanwhile at the bare and barren North, since they have strict rules and Communism frowns upon private companies with state property. Go figure.

North Korea has Pyongyang, though it has buildings, the place looks worse than what it looks like for a long time. South Korea has Seoul that has a lot of technological advancements and urban activity. It’s less somber than Pyongyang as well.

North Korea as we said earlier, is ruled by a dictatorship, the current one, Kim-Jong-Un and he has been making rounds on the news with bad remarks. South Korea, however, had already fixed its issue on their political problem.

North Korea has strict rules in tourism as well. They only allow four to six thousand Westerners in their lands annually meanwhile South Korea has a laxer rule and no quota in their tourism.

Freedom of the Press

Telling the people the news is one of the important aspects to figure out if living in the said country is safe and abides the free speech of their subjects. The World Press Freedom ranking can help you identify it. South Korea ranks 63rd while North Korea is in 180th spot. Meaning, free speech is much more respected in the South.

And there you have it. They have a ton of differences and if you ask me which country is better? You should also know it by now.