You are here: Up-daily » Health » Here's The Reason Sometimes You Can’t Move While Waking Up In The Midnight 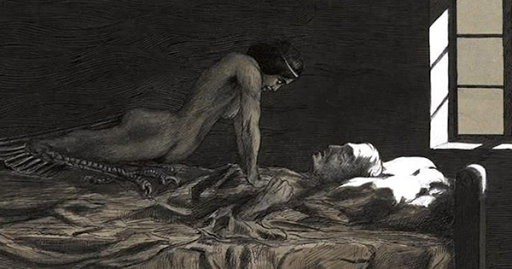 Sleeping is a great reprieve for our stressful daily lives. When we sleep, we forget about our problems in the real world and dream about new things and relax.
Who doesn’t like sleep, after all, right? But what if something goes wrong? What if you wake up in the middle of the night, but you cannot stand???

There has been a lot of talk about it. There were urban legends and rumors regarding this kind of weird event.

Some talk about a succubus or incubus they thought they see that are above them trying to stop them from standing and some reporting that those creatures are doing things that would be best not to say.

Some even thought about being visited by aliens and experimented them on some sort, creepy if you ask me. But leave those ideas behind as there is a scientific explanation for those things. Give up on myths and focus on the truths!

What is Sleep Paralysis?

Science talks about a phenomenon which is called “Sleep Paralysis”, it is a condition that still bothers people for hundreds of centuries which previous technologies, limited resources and a few pieces of knowledge discovered haven’t figured out what it is really and how the body makes it happen but today’s science has a great explanation on it. It is linked with one of the types of sleep, REM sleep. REM sleep is a kind of sleep that makes you conduct more eye movement and faster pulse and breathing.


Reason about this is because you are dreaming!

Our bodies are frozen in REM sleep so that we cannot do what we are doing in sleep in the real life. Have you dreamt of flying in the Grand Canyon? Think what would happen if we did that in reality? Thank the REM sleep for stopping that thing to ever happen.

Going back to our main topic, this type of paralysis is called REM atonia and it is pretty normal to be paralyzed at that state, it makes horrible memories when you wake up in the middle of REM atonia, though.

What are the causes of sleep paralysis?

Then, the answer to that question is the things that disturb the REM sleep. Something that disrupts it, it can be caused by stress, diet, lack of sleep and irregular sleep patterns. But besides those factors. Disorders, anxiety, substance abuse and other things can be considered for sleep paralysis.

The one that experiences sleep paralysis will first realize that he is awake and he is in the real world. After realizing it, he considers his area and there’s no “brain fog” in it, suddenly he realizes that he cannot move, that’s sleep paralysis at work.

I know some of my relatives have experienced it. I believe that it is due to stress and other underlying factors, whilst it is not harmful, it will still be a terrifying experience for someone who had the first-hand experience on that issue.

Some may have other hallucinations but don’t let it fool you, it’s just your mind. Override it. Control it. Master your mind so sleep paralysis won’t bother you!