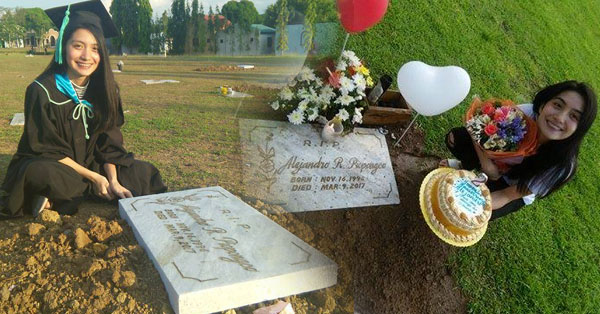 Life is indeed short. So while we still are living, we must make the most out of everything we can because we may not know what will happen in the next day. Having a relationship is indeed one of the happiest things in someone’s life.
You have someone to depend on, to lean on and to count on when things are going south. Losing one is indeed rough and this time, we feature someone who had lost someone indeed precious and her post will make you cry.
The name of the one that had the post is Kristine Donna Hernandez. She had a boyfriend named Alejandro Reyes Piopongco. They had a relationship that spanned a long time but sadly, there is no permanent thing in the world. Alejandro died before Donna’s graduation.

In this post, she reminisced every moment with him. She showed how much she loved her man and all the things that mattered to them. She said that he was excited to her graduation but he didn’t make it. She remembered all the things that she will miss. How his little efforts make her happy. She will also miss her translator in English and everything.

In the end, she thanked her boyfriend for everything he had done to him. She said that she never doubted him leaving despite they have different problems faced in their relationship. She didn’t regret meeting him and all the memories. She also thanked God for “lending” her his boyfriend. She knew that she only had him temporary and now she knows that her boyfriend is with her father right now in Heaven. She still trusts in God’s plans and she will never give up in life.

Life is never permanent. There will always have an ending. This girl had shown us true strength and love. Strength that even if she had lost someone special, she is still determined to face the future with determination and grit, also she showed that she still trusts God despite what happen and believes that He has a better plan for her, which is uncommon to see as some people who have lost someone will somewhat hate God and will not trust in Him anymore. But this girl is a special one as she will go on with life trusting in His plans.

True love that even in her boyfriend’s death she has shown how much she loves her and how their love is strong. She posted this tribute to her deceased partner to tell the world that her love to this person is strong and she will never forget him.

She has shown us that true love never dies and she is an example of it. Let her be a role model to those with relationships. Let her be an example for all those who have lost someone special in their lives.

It may be painful, true, but in the end, we must have the courage and determination to move on. Like what she said, we will be watched over by our loved ones in Heaven so let’s make them happy.