You are here: Up-daily » Informative News » Never Give Your Email Address And Mobile Number To Anyone Who Asks In Facebook 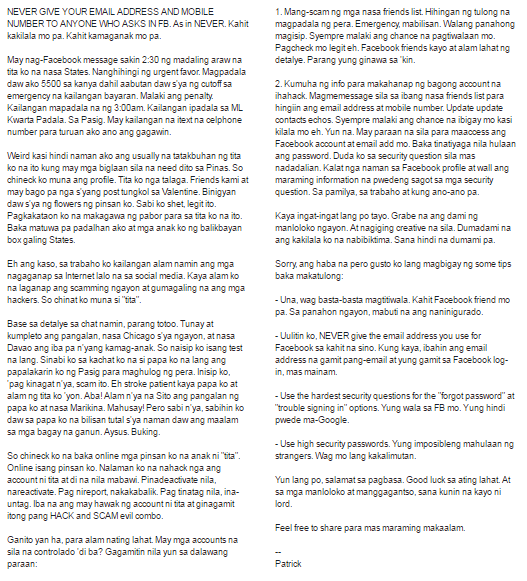 A concerned netizen shared his horrible experience with a Facebook Account Hacker and wanted to inform everyone that Facebook hackers exists to scam people.
The netizen received a Facebook message from his ‘tita’ from the same facebook account his real tita had, this ‘tita’ of his claimed that she needs to ask him a favor and he said yes of course.

But later did he know that his ‘tita’ from Chicago is now asking him to send money via ML KWARTA PADALA in Pasig.

The netizen of course became very suspicious, especially nowadays scams and hooligans are rampant, he then tested if this ‘tita’ is legit, firstly he said that he’ll ask his father to send the money (however, his father is currently hospitalized, so he is testing if he is speaking to a legit tita) luckily the scammer didn’t budge the proposal – confirming that it’s a scammer.

The netizen then contacted their relatives overseas and confirmed that his real tita’sfacebook account has been hacked and they can’t retrieve it any longer.


The netizen also highlighted the following about online scammers:

Once the hackers got hold of your Facebook account, the next step is to scam your close friends and family. That there will be some sort of Emergency with money and needs it asap. So you wouldn’t have time to think. And if you double check, the account their using is legit so you’ll put your trust to them and do as they ask.

Here are a few things you should be keen to avoid being hacked and scammed:

2. Make sure the answer for your security questions isn’t available online. Say your birthday, where you live, where you were born etc.

3. Don’t trust right away. If someone contacts you via Facebook and it looks fishy, don’t give personal details right away. Investigate.

4. Never share your e-mail address, it’s quite easy for hackers to hack your personal e-mails therefore getting access to your social media accounts.

5. Use high security passwords, best to have capital letters, numbers and symbols so it’s hard for hackers to gain access.

Hope this helps and let’s be vigilant with our social media accounts to avoid pesty scammers like these!