You are here: Up-daily » Home Project Inspiring » House Builder Gregory Kloehn and his Homeless Homes Project: Garbage to Some, Home for the Homeless

House Builder Gregory Kloehn and his Homeless Homes Project: Garbage to Some, Home for the Homeless 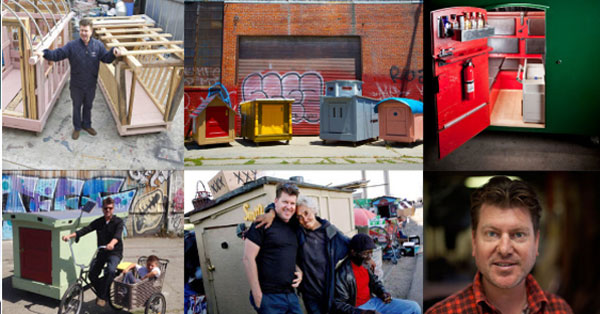 One day a homeless from the neighborhood, Shiela, knocked on his door asking if he has a tarp, as it was raining and they needed cover. That’s when an idea struck him. He called out to Shiela and told her to come by next morning.


So Shiela and her husband did came next morning and he gave them the house he built with from pallet's. And the couple started using it as their home. It shields the couple at night from rain and rats and they are able to bring their stuff with them while they scrounge plastics/garbage to sell.

One build was followed by another. He collects materials from scrap from illegally dumped garbage. Mostly what he collects are materials he can make use as doors,windows and floor. It can be a refrigerator door, washer door, screens, tarps, anything that can be recycled as a part for the homes he builds.


Now, he is giving training's to others who also wants to help and build homes for the homeless. His “Homeless Homes Project” is reaching out to people who wants to volunteer their time to help build these homes and also for people and /or companies that has a pile of garbage they needed removed.

His project has given not only shelter to the homeless but a home they can call their own, and bring back humanity in them.