You are here: Up-daily » Local News » Footbridges Cause Bypassers to Get into Trouble, New Modus?

Footbridges Cause Bypassers to Get into Trouble, New Modus? 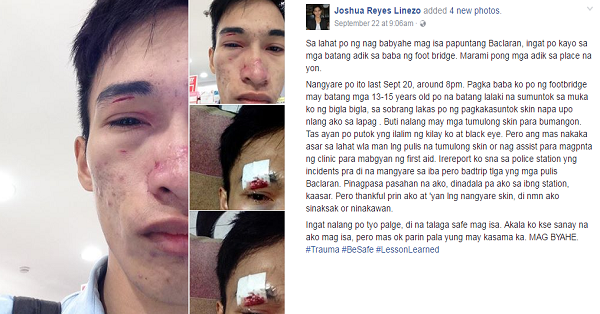 Footbridges are built primarily to keep pedestrians safe from the risk of getting run over by cars. It’s supposed to protect us from causing vehicular accidents when crossing streets and main highways.

However, this proved wrong to Joshua as he shared his traumatic experience on Facebook. He relived what happened to him for merely passing through the Baclaran footbridge.


Joshua was thankful that although he was hurt and obtained cuts and bruises, he was not killed nor robbed. Commenters say that it’s actually a modus operandi by some kids. They’ll knock you down, luring you into getting back and hurting them.

That way, they can pose for child abuse. Others are saying that the Baclaran police may be a part of the modus as well.

True or not, it only proves that caution and safety are still needed when passing through a footbridge.

Here’s a few tips for people who needs to pass through footbridges for their daily commute.