You are here: Up-daily » Inspiring Positive » A mom’s discontent over her family’s current situation turned to something positive - a new home for her and her children!

A mom’s discontent over her family’s current situation turned to something positive - a new home for her and her children! 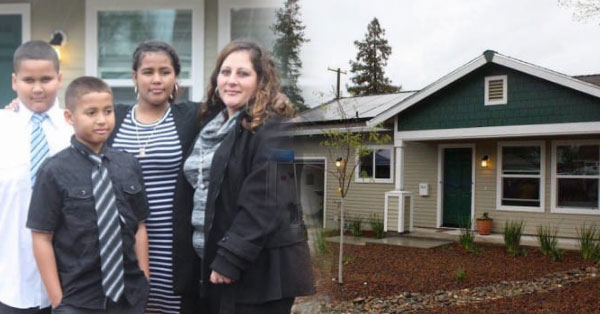 Something negative doesn’t need to be 100% negative, neither it has to be negative the entire time! You didn’t get that? Well let me explain further.

Discontentment, dissatisfaction, that was what Rina Dixon was feeling. It’s a negative feeling, a negative word, correct? And we say, why not just be content with what you have? Be happy for what you have? You have a roof over your head, can be cold during winters and blazing hot during summers, but hey, better than living on the streets!


However, Rina did not settle to just accepting their current situation. Her husband was killed in 2007 and they were forced to live in a public housing but Rina doesn’t want her children grow up in the kind of environment where they live in fear.

She decided to transfer with her kids in her mom’s garage. She stayed there for 3 more years. But discontent again pushed her to do something. She can’t stand the situation of her family. Her eldest, sleeps in the living room, while she and her 2 younger boys sleep together in a makeshift room.

Now, she did not settle living in negative. Her discontent for their current situation motivated her to work at something to better their situation.

She connected with Habitat for Humanity of Greater Sacramento, and was luckily accepted to the program. As a policy, Habitat for Humanity requires the family to bring in 500 hours of work to help build their house. Rina had put in most of the work and when her eldest turned 16, she too was able to help put in the few more hours left to complete the 500 hours.

In March of 2016, the family was finally handed over the key to a beautiful 3-bedroom 2-bath home built with the highest standards set by Habitat for Humanity.


Rina, turned that negative to something positive. She used it as a motivation, to push herself to look for ways to provide her family a better life!