You are here: Up-daily » Inspiring » Badjao Lola Dives for Coins Thrown by Ferry Passengers for a Living 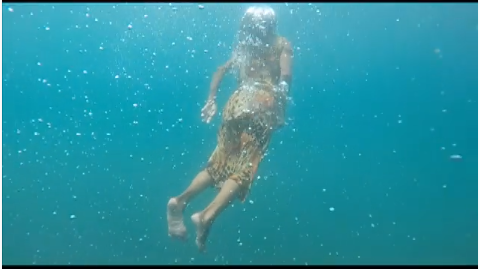 Somewhere in Lucena, Quezon, a 74-year-old woman dives into the ocean to gather coins thrown into the water by ferry passengers.

If you think you are having a tough time, think again. There are a lot of people who have it tougher. There are people out there who do not sit in air-conditioned offices. Some people even risk their lives just to make money.

Maria Tequillo, more popularly known as Lola Maria, waits everyday for people boarding the Dalahican Ferry. She asks them to throw the coins. Then, she dives underwater for them.


Believe it or not, this is what she does for a living. The elderly woman needs to support four grandchildren. The parents of these children live in other provinces.

Every centavo is important. Lola Maria wakes up very early in the morning and rides a small boat to reach the Lucena pier. Once there, she asks the passengers for coins.

Each day, she is able to collect P100 to P200. The amount she makes depends on how many people are there as well as how much people give her.

Lola Maria does her best to budget the amount of money that she makes. She uses this money to pay for the education of her grandchildren and for their daily needs.

Unfortunately, Lola Maria’s health is starting to deteriorate. Her vision is no longer as sharp as before.

It is sad to know that some people belittle Badjao people like Lola Maria. She doesn’t care about criticism, though as her priority is to make a living.

She said that even though life is hard, she is choosing to focus on making a living and keeping her family safe. - Source | Front Row