You are here: Up-daily » Fitness Lifestyle Prank » Athlete Disguised As an Old Man Wowed People at the Muscle Beach 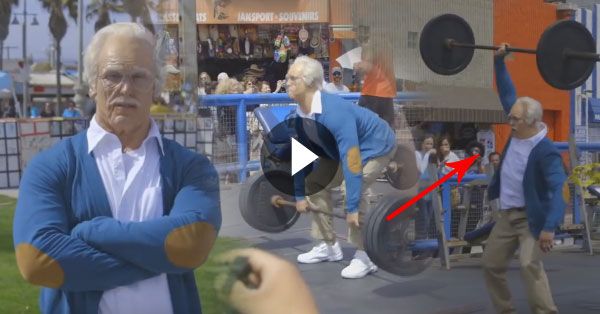 One day, Thrillist asked him to take part in a prank, which was sponsored by Smith & Forge Hard Cider. The prank was supposed to be short and not more than four minutes. Kenny had to disguise himself as an elderly man who walks around the Muscle Beach. So, off he went to the beach, wearing old man clothes, wig, latex, makeup – the works!

In the video, Kenny is seen walking around the beach and greeting people he passes by. When he comes across a group of young bodybuilders, he asks if he can try the deadlift. They let him do it.

At first, he appears to struggle with the equipment. People watch as he attempts to lift the weight. He becomes successful and people applaud in awe. He even challenges a lifter to a snatch off. Kenny does some back flips, clean and jerks, pistol squats, and snatches among others.


This prank is nothing new. In fact, it has already been done by mainstream sports superstars and major brands before. Remember Cleveland Cavaliers’ Kyrie Irving as “Uncle Drew” in the popular Pepsi ads?.

This time, however, Kenny did a great job convincing the crowd at Muscle Beach that he really was an old man who can lift weights. He even gave them advice on staying motivated, forming consistent training habits, and drinking prune juice.